The Dangers of Polydrug Use 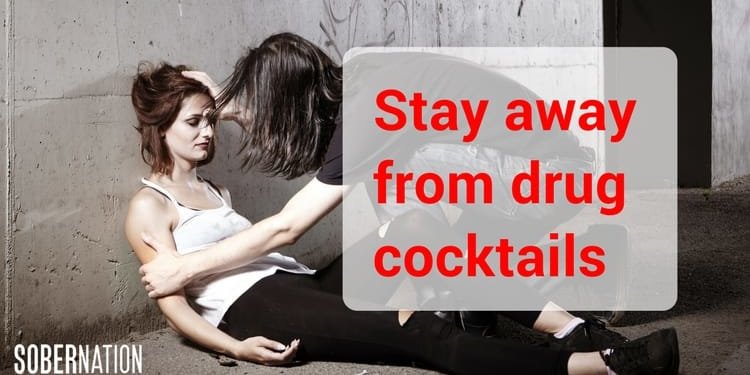 If you haven’t tried it before, you’ve likely heard about it before: Heroin and cocaine. Benzos and alcohol. Ecstasy followed by marijuana. Some muddled cocktail of prescription drugs. Out of necessity or recreation, it is not uncommon to find drug users concocting their own blends of substances to get by or get high. This is called polydrug abuse, and is among the most dangerous drug habits happening today.Polydrug use means abusing multiple (two or more) drugs in combination with each other with the intention of feeling a particular effect. For example, the popular “speedball” combo allows users to maximize the effects of cocaine and heroin, without experiencing the anxiety and sedation that each drug often brings. Many ecstasy users will smoke marijuana or drink alcohol simultaneously, to avoid the intense comedown that typically follows the MDMA drug. In the same breath, a person addicted to prescription painkillers might mix in some other pills, too, thinking that their normal dosage is no longer cutting it. They need more, more of anything, to feel the effects.

The problem is, polydrug use is extremely dangerous, posing a high risk for drug overdose and other serious health complications. So much, in fact, that it is driving millions of people to emergency departments each year. It is estimated that about 600,000 annual ER visits are related to the use of drugs and alcohol in combination. And just years ago, experts revealed that the majority (56 percent) of illicit drug-related ER visits involved more than one drug. Depending on the substances at play, these polydrug combinations can prove fatal.

One of the most threatening polydrug recipes of all is the combination of cocaine and opiates. Together, their effectiveness increases twofold. Yet cocaine and opiates are two chemically opposing drugs, especially once they hit the body.

Cocaine is a stimulant that produces a powerful and fast-acting high. Opiates, whether in the form of heroin or prescription painkillers like OxyContin, are depressants that stay in the body much longer. Opiate drugs slow the heart down. Cocaine increases a user’s heart rate. So when taken simultaneously, the heart runs the risk of losing its rhythm and users may experience a heart attack or stroke. Fatal respiratory depression is also a high risk of the cocaine-opiate combo, and remains the most common cause of death related to polydrug abuse today.

This is just the beginning. Other potentially-fatal polydrug combinations include, but are not limited to:

Why do people continue to try dangerous drug mixtures despite the known consequences? Why would our loved ones choose to make these deadly drug cocktails in the first place?

Part of the problem is a lack of awareness. Especially among teens and young adults, we cannot always know or predict the chemical interactions that could happen between two different drugs. Even if we know the separate risks of each drug (e.g. cocaine can cause heart attacks; heroin can induce a coma), their interplay is not often thought of or understood.

The other issue is that most users are not thinking rationally when making these risky decisions. Drug addiction is a disease of the brain, and those struggling with it are often compelled by obsessive and uncontrollable behaviors. When they need a fix, they may do everything in their power to get it, without thinking twice about it. This is how the addicted brain is re-wired. Drug abuse is not a choice, but rather, a compulsion.

This is also particularly true among adolescents and young adults, who are naturally prone to risky and impulsive behaviors, and whose brains are especially vulnerable to drugs. They may think that one drug is not enough. They may think that more drugs equal more fun. They may try to maximize or prolong their highs by using multiple substances at the same time.

Because polydrug use enhances the rewarding effects of drugs, and because a polydrug high is so intense, it greatly increases a user’s chances of becoming addicted. And when a polydrug addiction is present, when polydrug abuse becomes a regular occurrence, the chances that a user will overdose also increase exponentially.

If you or a loved one is struggling with a polydrug dependency, we encourage you to seek help as soon as possible. Even if it has just been a few occurrences of polydrug abuse, or only lingering suspicions of such, we recommend acting on them instantly. Do not wait for things to get worse. Do not wait for your loved one to ask for help; in the case of a polydrug addiction, users are especially resistant and unwilling to get treatment.